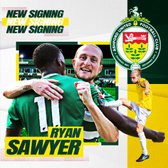 Ashford United is pleased to announce the arrival of Corinthian defender, Ryan Sawyer, this morning.

Sawyer, 28, will add to our defensive options heading into the new season. The former Cray Valley man plays as a centre-halve but can also take up a role at full-back if necessary.

He becomes the club’s first summer signing and Tommy Warrilow is pleased he could fend off strong interest elsewhere in the defender.

“Ryan [Sawyer] had plenty of clubs after him this summer so I am delighted we could get this over the line.” Warrilow said.

“At 28, I know he’s in his prime. He’s just had a strong season with Corinthian, who despite being new to the league, more than held their own with the impact of Ryan at the back.

“I am looking forward to working with him and I know he will bring strength to our defence – It’s just a brilliant addition to our squad.” He finished.

An eighth place finish for Corinthian in 2021/22 saw them hold firm in their first season in the Isthmian League South East Division. Only three sides conceded fewer goals than The Hoops.

Speaking on his arrival, Sawyer told the club website that the opportunity to join up with Ashford was too good to turn down as he opens himself up to a new challenge.

“After a few positive conversations with Tommy Warrilow, in addition to seeing how well the club performed in the last season, the decision to join was a relatively easy one for me to make.” He said.

“I’m feeling very excited about this opportunity and following the events of the last campaign, I am hoping I can help take them one better this time around.

“Respectfully, I do consider this a step up. As you’ll probably be aware, that was Corinthian’s first time in the league and we more than held our own with an eighth place finish.

“But ultimately, Ashford are competing at the very top and that’s an exciting challenge I want to take on. The league will be strong and very competitive with some top new sides joining us but of course the aim will be promotion. If I can play my part with clean sheets, I’ll be happy.” He finished.